The Essence SUL, a design by Pim Kusters made available to the kiting community as an open source plan, intrigued me for quite some time prior to the development of this particular sail/graphics layout.

While creating original graphics is something I enjoy as a kite builder, I thought that an open source plan deserved the input of the audience it would serve.  To achieve a design that was both original and enjoyed by kiters other than myself, I started a small contest on a popular kiting forum.  Members of the forum submitted their interpretation of what they would like to see the Essence become.  Incentive was provided, as the winner (by popular vote) would be provided with an Essence with the winning design.

24 designs were submitted and edited to be represented equally in a poll on the forum.  The entries all required considerable editing in order to display the patterns in an unbiased nature.  After a week of voting, several designs earned the majority of votes.  Two designs tied for first place, leaving me with the decision to pick the winner from the two.  I chose the design that would best translate into a reproducible plan… simple geometry and fewer panels won out.  The winning design was created and submitted by Dana Farina, a member of the Gone With the Wind forum where the contest was presented.

Dana’s design was inspired by by the Snowbirds, the Canadian Airfare Air Demonstration Team pictured here. 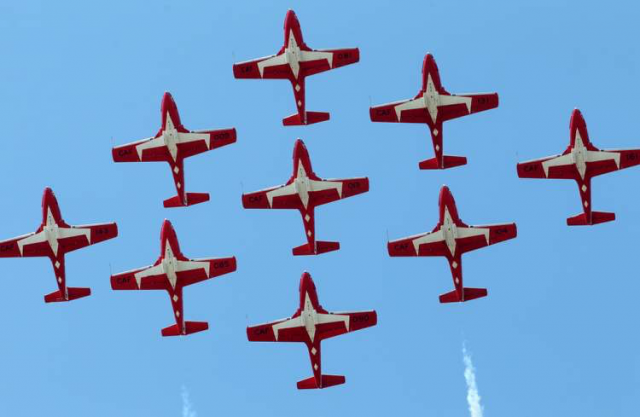 Once the winning design was decided upon, came the task of placing the graphics within the plans.  Utilizing CAD software, the graphics were added utilizing the fitting placements as landmarks.  The design entries were all submitted using a basic template that represented the kite in it’s assembled state.

By utilizing the fitting placements, the design was altered to fit on the flat sail in a way that translate to the proper visual effect when the kite was assembled.
The PDF file, availble now with the panel layout, has also been altered to represent the proper leading edge length.  All original markings remain, and some additional guidelines for leading edge openings have been added.  The paper size was adjusted for U.S.A. printing standards, and fits on a 36” wide sheet.  My recommendation is to print the plan in full scale, and then trace the individual panels to new paper to create templates.  Keep in mind the overlap required for the panels to be sewn.

Originally, only two kites of this design were to be made… one for the winner of the contest and one for myself (Dana’s color choice on top, my color choice on the bottom).  Since completing these kites, Dana has expressed that he is not only willing, but pleased for the design to be made available to any who wish to build it.  Overall, I would consider this a successful collaboration of artistic input and technical adaptation to the plan.  I quite enjoyed the project and look forward to seeing other’s builds in the future.