A long time ago, I built someone (Pascal du Pree) a smaller version of the Sixth Sense. Davide Equizzi himself already experimented with a 85%-version, but because Pascal likes fast kites, we decided to go for a 80%-version with the framing of Davide’s 85%. That kite was really fun to fly; very fast in the tricks, never much slack needed.

I proposed to Pascal later, that a SUL-version of his kite would not be expensive, because I thought a 4mm-framing would work nice. He went for it and I built a light sail and framed it with 4mm Carbon leading edges, spine and upperspreader and took 2PT for the lower spreaders.

It turned out that this kite was (also) a blast to fly. It was really light enough (just needs the slightest of winds) and fully trickable. Even CrazyCopters, Tazmachines and Yofades are there without much effort. It flies and tricks like a standard kite, there are some similarities with the Transformer TL SUL from Lam Hoac. The Yoyo is very un-SUL: very quick! Also the Rolling Cascade is a nice trick with this kite, not common for SUL’s again.

But most SUL’s have a nice and stable Backflip. Not the case here. The Sixth Sense.80 SUL is too small for it. You can hold it a few seconds in a Backflip, but the kites prefers to be tossed around.

If you want a cheapish SUL, fully trickable and fun to fly, you can build this configuration.

Pascal saw some room for improvement, because he felt the leading edges were a bit too soft (you can feel that in corners and in the Tazmachine,  and a double Yoyo makes the leading edge bend a lot inwards). He decided to reframe the whole kite and chose very light rods: P90 in stead of the 4mm Carbon.

So the “Du Pree”-configuration is:

I flew his “new” kite and immediately decided to build one myself. This took a few months, but mine is also ready and it is a fantastic low wind tricker.

If you want to build one, just take all the measurements of the Sixth Sense and type *.8 on your calculator. Most printshops can print the Sixth Sense-documents at 80% for you. The seams are a bit narrow now, but the sewing machine can just go through the small overlay in the panels. You have to be a bit more precise stitching the panels.

Of course, use light Mylar as reinforcement and Spinnaker for the leading edge. As connectors use Tiny-Apa’s for all four of them. For the centrecross I used one from bridleline, but I don’t think it will hurt if you use a light connector here. Hollow ferrules, of course (just use an old 6mm Carbon rod).

The 80% is also used for the bridle, but you – of course – will use light bridleline (like 25kg). As weight 10 grams is good. You can take less, to lower the windrange, but we want a fast one-pop-yoyo! I did not use a leechline in such a small, light kite. But as compromise, I stitched the trailing edge twice with the three-step-zig-zag.

I’ve added some pictures of my build. You can see the materials I used.

About the Sixth Sense.80 SUL’s I know of: 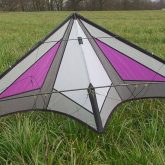 Pascal du Pree: Described above. I have to say that Pascal even changed the kite further, like shifting the upper spreader up and maybe also the lower spreader.

Also some minor changes in the bridle. He loves the kite and flies the kite from superlow winds up to 3 Beaufort. 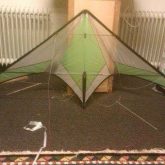 Chris Wojtas: He built the 4mm version. Likes the kite. Chris also felt the 4mm leading edges were a bit weak and he stiffened the frame use using bridleline. He made two lines from upper-Apa to centrecross. This minimizes the flex in the leading edge and keeps the kite more solid. Good idea, Chris!

Below a (small) movie from Chris. You can see the Yoyo-behaviour and the quickness of the kite. 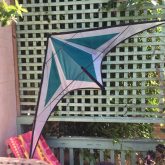 He took some light rods he had laying around (2PT leading edge, Avia Skinny spreaders) and was also amazed by the trickability of this small kite. 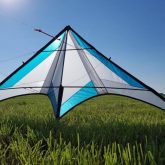 Mine (Krijn Hemminga): Five times P90 and two 2PT’s. Big fun to fly around. I hope I can make a movie before this article ends up online. (Propably not. But yes, I had a very low wind his morning!)

Have fun building yours, and show us your pics!