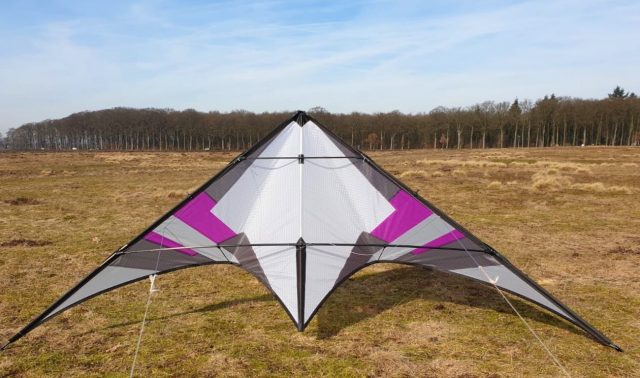 Turned out to be a nice tricker with a great taz machine and a deeper backflip. Backspins are better as well. Still quite slow and precise in flight. The signature Vendetta slotmachines are a bit lost. Maybe a little tweaking can bring those back. Krijn Hemminga was interested in building one as well so we both have a matching kite to do some pair trick flying. A bunch of other friends within our little community have build 90three’s as well. So there’s quite a few now.

Since then we also experimented with larger versions: the 90Nine and 100Sixteen and even a whopping 100Fifty version (336 cm wingspan). Smaller/lighter versions like the 90Nothing are also available and a lot of fun to fly. You can find video’s of the kites on the plan pages.

Please send me a picture of your kite so i can add them to the builds pages (if you follow the color scheme).

I would REALLY appreciate it if builders would stick to the color scheme for the different weight versions.